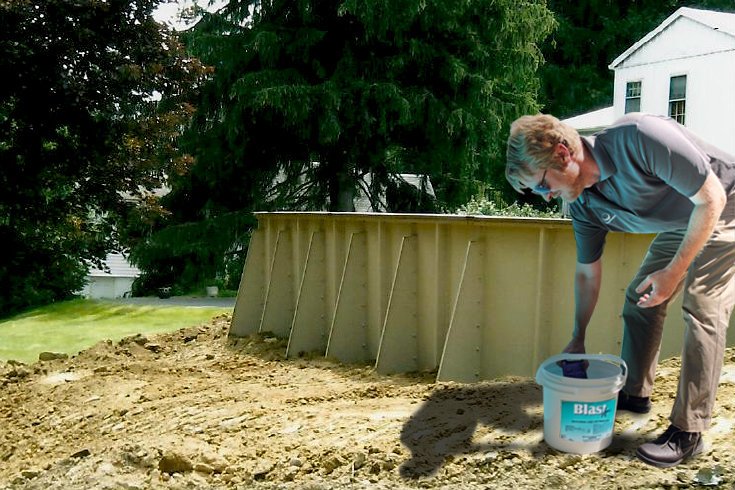 Ground preparation is critical when installing any pool. But most believe that any remaining vegetation will die off after the liner is dropped. A large surface area, tremendous amount of weight, and lack of light make all sorts of plant life die off. By many accounts, that is relatively sound logic. Who hasn’t seen a giant dead spot form after placing a rock or lawn ornament on a healthy patch of a lawn?

However, gone are the days of simply putting the pool liner on top of the compacted level ground. Experienced builders and installers of vinyl liners know that more needs to be done to prevent problems that come from the ground under the pool liner.

Enter nutsedge, more commonly known as nutgrass and widely recognized as an invasive species in the U.S.

This plant thrives in moist and nutrient-rich soil. Unfortunately, it is highly adaptable and, when given enough time, can tolerate drought conditions, poorly maintained soil, and even mountainous areas. Though prominent in the southern United States, several varieties have started to take off in northern states, Canada and up both coasts. Other, minor types of nutsedge have been identified in several midwestern and northern states.

Regardless of what you call it, nutsedge is a nuisance that wreaks havoc by taking away resources from other plants and crops. When untreated or undertreated, this plant can poke through asphalt, rock-covered blocks and beds, and plastic ornamental landscaping mulch. And, of course, it can grow directly though the bottom of a vinyl liner. It can even find its way between the liner and the wall, then penetrate through the side of the liner. And there is no viable recourse to remedy a hole in a pool liner with a plant sticking through it.

While some people refer to this plant as nutgrass, the term nutsedge is more accurate, as it is actually a type of sedge. Grasses typically have hollow, soft, rounded stems. Think about your lawn: Its makeup allows it to be easily pushed to the ground and bounce right back. Sedges, which grow much more upright than grasses, have solids stems that are triangular in shape, making them stronger. Additionally, sedges have much thicker and stiffer leaves compared to grasses. These traits, along with the fact that sedges tend to grow much faster than grasses, enable them to penetrate several types of surfaces and materials.

Tilling, scooping or simply pulling nutsedge out of the ground will not eliminate it. At the end of the root structure, an actual bulb will develop. Though some refer to this as the nut of the plant (hence the name nutsedge), they actually are called tubers. They typically are small, depending on the type of nutsedge, but tubers can grow as big as ½ inch in diameter. The tubers, whether still attached to the plant structure or even when separated, will fully develop into a brand new plant. The tubers can retreat more than 1 foot below the surface, adding a high level of difficulty in fully removing them from the area where a pool will be installed.

The most effective way to eliminate nutsedge is to remove and replace the soil. However, this is not a practical option for most homeowners.

The next best option would be to use a glyphosate based weed killer. When used as directed, these herbicides are doused over the plant and kill the stalk and some of the root structure. However the treatment may only minimally impact the plants’ tubers, especially if fully grown. After existing nutsedge has been eliminated, future growth can be prevented by using dichlobenil as a ground treatment.

Dichlobenil (die-klo-bin-el) is a selective herbicide in that it only kills perennial grasses and weeds. The chemistry is only applied to the top layer of soil, so established shrubs, trees and other plants with deep root structures will not be affected by its application, when used in accordance with directions.

Once the ground is fully prepared, before the installation of the pool or replacement of the vinyl liner, the dichlobenil product should be spread out evenly over the areas where the pool will be placed. It also is recommended to treat 2 to 3 feet beyond the pool perimeter to account for the long root structure of nutsedge, which can easily make its way back under the pool liner if its bulb is a few feet away in surrounding soil.

Once the material has been uniformly scattered, ideally with a hand spreader, it should be raked well into the soil. Afterwards, the treated area needs to be soaked with water to begin breaking down the dichlobenil crystal, which eventually leaches into a small surrounding area and then forms an herbicidal vapor barrier. When the barrier is established at the soil surface, any nutsedge growing from a remaining tuber will die off as it germinates through the vapor barrier. The barrier lasts typically for 9 to 12 months after initial application.

A ground-preparation treatment should be considered if the bordering area of the yard or even the surrounding neighborhood is known to have nutsedge infestations. Reapplication should be performed annually around the pool perimeter to ensure that no new growth permeates through the ground.